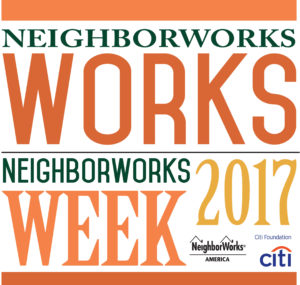 Every year in June, we join with organizations nationwide to celebrate NeighborWorks Week. In 2017, we narrowed our focus to a single block in the Frogtown neighborhood. In partnership with Twin Cities Habitat for Humanity, Frogtown Neighborhood Association, and Historic Saint Paul, and led by community residents, we examined how concentrating and combining resources could allow everyone involved to maximize impact.

After nearly a year of creative and responsive planning, we celebrated with a kick-off party for the entire block, knowing it was not the end of the work but the beginning of new relationships.

Habitat for Humanity brought volunteers and materials for their A Brush With Kindness program to make repairs to three homes on the block. Historic Saint Paul offered advice on preserving significant details, and a local historian led a walking tour to teach about the history of the homes. NeighborWorks Home Partners staff and board members worked together to plant new perennial gardens in the boulevards and front yards of ten homes.

The day was filled with music, fun and games, a resource fair, and culminated in a delicious and nourishing organic community meal.

Two residents, Kiki and Judy, worked tirelessly together to connect with their neighbors and create a celebration that they felt would honor everyone on the block. They attended planning meetings, grew their vision for their neighborhood, and delivered numerous rounds of fliers to help their neighbors know what was going on, knocking on every door to have a conversation and recruit more participants for the gardening.

Kiki reported that her new garden had a bigger impact than she expected. More than just adding greenery to her boulevard, she found it was a conversation starter and helped her meet more people who lived nearby. Just by being outside in the evenings to water the plants, she was able to foster the growth of friendships and community.